Thread Dump is a very useful tool for diagnosing problems with Java applications. Every Java virtual machine has the ability to generate a thread-dump of the state of all threads at a given point in time. Although the thread dump printed by each Java virtual machine varies slightly, most of them provide a snapshot of the currently active thread and a stack trace of all Java threads in the JVM. The stack information usually contains the full class name and the methods executed and, if possible, the source code line number.

Generally when the server hangs, crashes or has low performance, you need to capture the server’s thread stack (Thread Dump) for subsequent analysis. In practice, a single dump is often not enough information to confirm the problem. In order to reflect the dynamic change of thread state, we need to do thread dump several times in succession, each time with an interval of 10-20s. It is recommended to generate dump information at least three times, and only if each dump points to the same problem, we can determine the typicality of the problem.

Be careful, one wrong step can kill the server process. kill -9 command will kill the process.

Stack information should be interpreted in reverse: the program executes first on line 7, then on line 6, and so on.

That means the object is locked first, locking the object 0xb3885f60, and then releasing the object lock and entering the waiting state. Why does this happen? Take a look at the following java code example to understand.

The state of the thread at the code level is further indicated in the first line of information on the stack, e.g.

A thread is waiting for access to a java object’s monitor (also called a built-in lock), i.e., it is waiting to enter a method or block protected by synchronized. synchronized is used to ensure atomicity, and at most one thread can enter the critical area at any given time, and other threads can only wait in line.

Many thread-related classes in J.U.C provide both time-limited and untimed versions of the API. timed_waiting means that the thread has called the time-limited version of the API and is waiting for time to pass. When the wait time has passed, the thread can resume running as well. If a thread enters the WAITING state, a specific event must occur for it to resume; a thread in TIMED_WAITING will resume if a specific event occurs or if the time elapses.

A thread stays in this state when it finishes executing, when it returns normally from executing the run method, or when it throws a runtime exception and ends. At this point the thread is left with only the Thread object, which is useless.

This state means that it is either waiting for another condition to occur to wake itself up, or simply that it is calling sleep (n).

At this point the thread state is roughly as follows.

In multi-threaded JAVA programs, synchronization between threads, we should talk about Monitor.Monitor is the main means used in Java to achieve mutual exclusion and collaboration between threads, it can be thought of as a lock on an object or class. Every object has one and only one Monitor. The following diagram depicts the relationship between threads and Monitors, as well as the state transition diagram for threads. 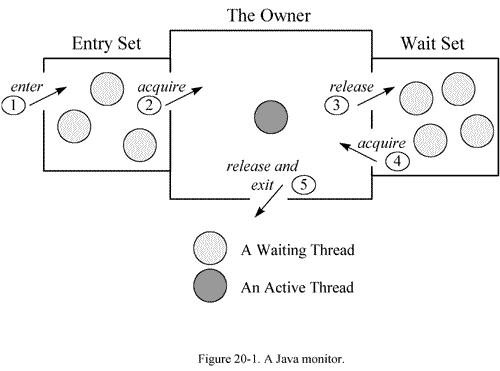 There are two possibilities at this point.

Critical areas are set up to ensure the atomicity and integrity of code execution within them. But because the critical zone only allows threads to pass serially at any given time, this is the opposite of the original intent of our multi-threaded program. If synchronized is used extensively, or improperly, in a multi-threaded program, it can cause a large number of threads to wait at the entrance to the critical zone, causing a significant degradation in system performance. If this is found in a threaded DUMP, the source code should be reviewed and the program improved.

As mentioned above, if the synchronized and monitor mechanisms are not used properly, it may cause performance problems for multi-threaded programs. In JDK 5.0, the Lock mechanism was introduced to give developers more flexibility to develop high-performance concurrent multithreaded programs, replacing the previous synchronized and monitor mechanisms in the JDK. However,** it is important to note that because the Lock class is just an ordinary class, the JVM has no way of knowing the occupancy of the Lock object, so the thread DUMP will not contain information about Lock**, and problems such as deadlocks are not as easy to identify as with synchronized programming.