Some time ago, I was involved in locating a problem with Tomcat that involved a sendfile system call. I suddenly thought of some of my previous experience with Java, and knew that there was a lot of open source software in the Java space that applied zero-copy to improve its performance, so I came up with this article. Look at these familiar software, have you ever understood the technical points behind their application:

2 What is Zero Copy

Zero Copy means that the computer performs an operation without the CPU first copying data from one part of memory to another specific area. This technique is often used when transferring files over a network to save CPU cycles and bandwidth. Avoiding having the CPU do a lot of data copying tasks frees the CPU to focus on other tasks, which allows the system resources to be used more efficiently.

Before figuring out zero-copy, let’s put Java aside and understand a few core points of knowledge in the I/O architecture in Linux.

With the traditional I/O way of working, there exists data reads and writes that are copied back and forth from user space to kernel space, while kernel space data is read or written from hardware such as disks/network cards through the hardware I/O interface at the OS level. 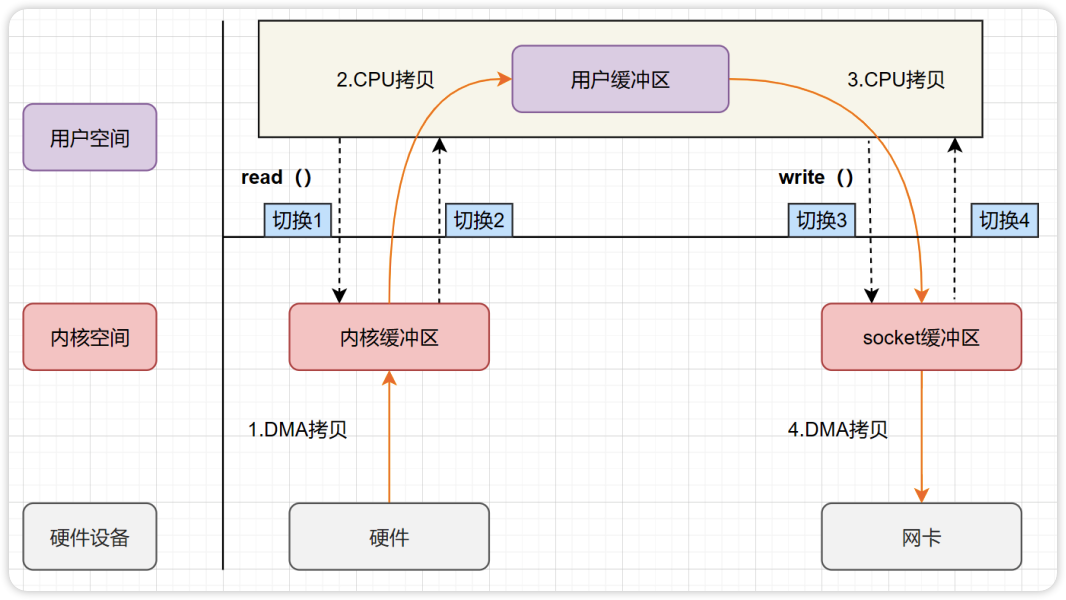 The code will involve 2 system calls. Both file and socket are abstracted as files in Linux, and the first argument of the following functions are actually file descriptors.

There exists a data exchange between user space <-> kernel space <-> disk/network card, where 4 data copies occur, 2 of which are DMA copies and the other 2 are via the CPU.

Linux uses virtual memory management, where multiple virtual memories can point to the same physical address. Using this feature, virtual addresses in kernel space and user space can be mapped to the same physical address, so that data does not need to be copied back and forth during I/O operations. By mapping the read buffers in the kernel to the buffers in user space, all IO operations are done in the kernel.

mmap is a system call provided by the kernel, and its function prototype is as follows.

mmap+write takes advantage of the virtual memory feature for zero-copy, which flows as follows. 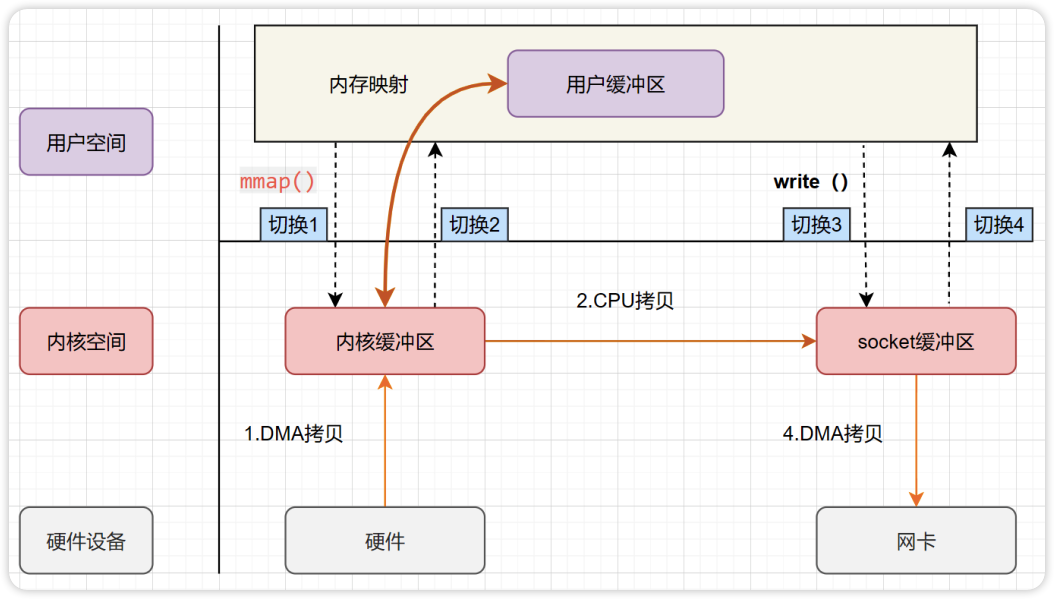 sendfile is another system call provided by the kernel, and its function prototype is as follows.

sendfile can transfer data between two file descriptors. It operates in the OS kernel, avoiding the copy operation between data from kernel buffer and user buffer, so it can be used to achieve zero copy. The flow is as follows. 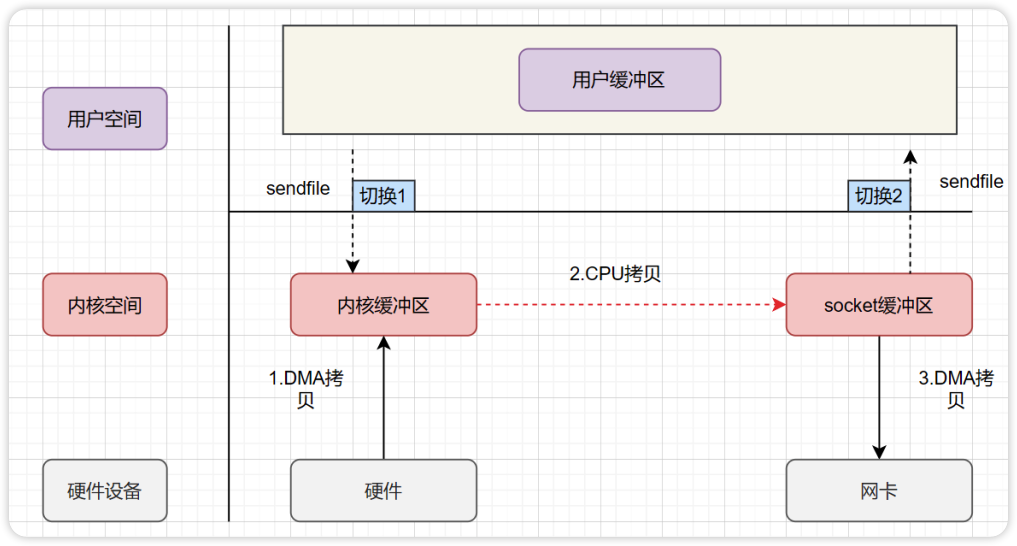 The sendfile method has 3 data copies, including 2 DMA copies and 1 CPU copy, and 2 context switches.

The Linux 2.4 kernel optimizes sendfile by providing a sendfile operation with scatter/gather, which removes the last CPU copy. The principle is that instead of doing data copy in kernel space Read BUffer and Socket Buffer, the memory address and offset of Read Buffer are recorded into the corresponding Socket Buffer so that no copy is needed. The essence is the same idea as the solution of virtual memory, which is the record of memory address. The flow is as follows. 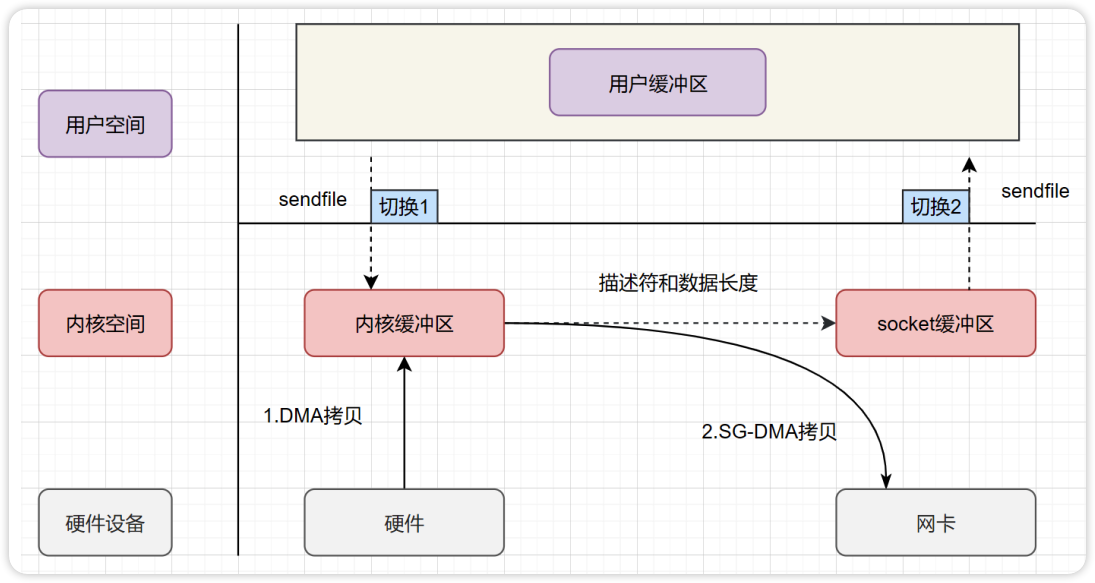 The scatter/gather sendfile has only 2 DMA copies, and 2 context switches, the CPU copy is completely gone. However, this copy feature is requires hardware and driver support.

The splice was introduced in Linux version 2.6.17 with the following function prototype.

The splice call is very similar to sendfile in that it is not limited to the functions of sendfile. That is, splice is a superset of sendfile. Also the kernel has a tee function that is specifically applied to move data between two pipes, again with zero copies.

The so-called zero-copy is to reduce the CPU copy and reduce the context switch, as summarized below.

After the introduction of zero copy, 2 DMA copies are all but indispensable, as both DMAs are hardware dependent.

Compared to the OS layer, Java has its own heap memory management due to the introduction of GC in the JVM. Zero-copy needs to consider two issues.

Thus, the core of Java’s zero-copy technology starts with the ability to use off-heap memory.

The JVM’s GC mechanism, on the other hand, can have copy moves to the memory it manages, which can affect efficiency. When there are high performance scenarios that require direct use of OS native heap memory, DirectByteBuffer is available to directly request and release JVM off-heap memory. This memory is not managed by the JVM and is not affected by GC. DirectByteBuffer uses off-heap memory and thus avoids the copy caused by JVM GC.

The Java NIO API provides a zero-copy API wrapper for the OS layer, which is also very convenient for upper layer applications to use.

The related configuration can be found in: Advanced IO and Tomcat and Default Servlet Reference .org/tomcat-9.0-doc/default-servlet.html).

Tomcat defines three types of Endpoint, corresponding to the above three IO modes, which are implemented in NIO mode NioEndpoint.java you can find the following code.

RocketMQ is using mmap+write to send the content of CommitLog file, which avoids the copy of heap memory of JVM and also reduces one CPU copy, but does not use sendfile.

We can find it in MappedFile.java to find the file mapping initialization, message consumption and deletion need to support random read and write is also well understood: the

When the client comes to pull the message, we can use the PullMessageProcessor.java where we can find the following code.

This article has collected and organized some knowledge points of zero-copy, and simply open the source code of two open source software to see, you can see that zero-copy technology is not a complex and advanced technology, in the Java layer is also very simple to use. I hope this article can give you some inspiration to apply zero-copy technology in the subsequent network programming.