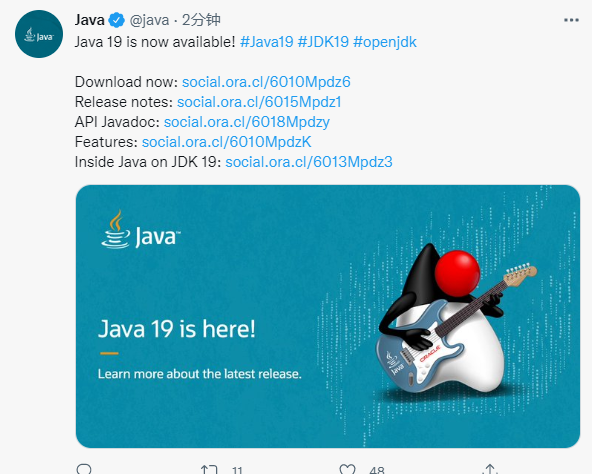 This is an enhancement to the Record Class that went into effect in Java 17. JEP 405 allows record patterns and type patterns to be nested for powerful, declarable, composable forms of data processing.

In JDK 16, we could already implement the following features.

But the above feature is not very silky when applied to Record Class, it still requires the property method to get the property value.

Of course this is only a small part of JEP 405, the feature can also be applied to switch statements, or even nested conditions.

Due to the increasing availability of hardware for RISC-V instruction set architectures, ports for the corresponding architectures are available starting with Java 19.

RISC-V is a free and open source RISC instruction set architecture (ISA) originally designed by the University of California, Berkeley, and now developed collaboratively under the auspices of RISC-V International. It is already supported by a wide range of language toolchains. With the increasing popularity of RISC-V hardware, a port of JDK would be valuable.

This feature allows Java programs to interoperate with code and data outside of the Java runtime through the API. By effectively calling external functions (i.e., code outside the JVM) and safely accessing external memory (i.e., memory not managed by the JVM), the API enables Java programs to call native libraries and manipulate native data more safely than using JNI. This JEP is not the first preview, relevant features have been incubated and previewed one after another since JDK 14, this is an improvement to the previous relevant preview features.

In Java 19 virtual threads are officially presented as previews, which simplify the operation of multiple threads and make the previously “expensive” threads more “affordable”.

Introduces an API to express vector computations that can be reliably compiled at runtime to the best vector instructions on the supported CPU architecture, achieving better performance than equivalent scalar computations. This feature is an old face, and is in its fourth preview.

Pattern matching for switch statements, which has not yet been converted, is in its third preview. Fat has introduced the feature many times, you can go to Fat’s previous JDK release to see the article.

The main class of the Structured Concurrency API is StructuredTaskScope. This class allows developers to construct tasks as a series of concurrent subtasks and coordinate them as a unit. Subtasks are executed in their own thread by forking them individually (fork), then joining them as a unit, and possibly canceling them as a unit (cancel ). Successful results or exceptions of subtasks are aggregated and handled by the parent task. The StructuredTaskScope restricts the life cycle of a subtask or fork to explicit lexical scope, so that we can write multi-threaded code as if it were single-threaded code. An official example is given here.

Java’s multi-threaded programming is a nightmare for developers, and this feature promises to improve the situation.