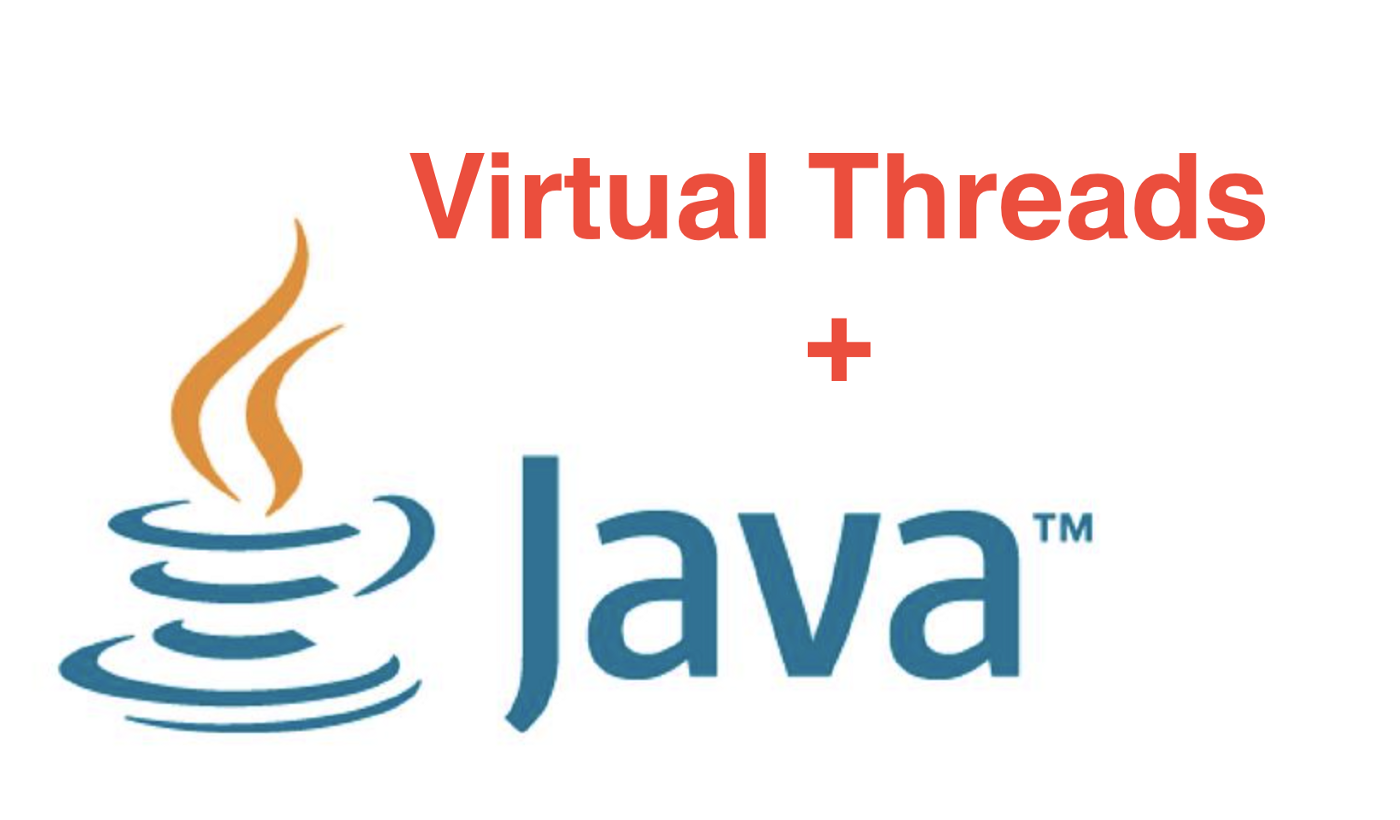 Java19 was released yesterday, bringing a new feature that Java developers have been waiting for - virtual threads. Before Java had this new feature, Golang’s Goroutine had been popular for a long time, and it was a big hit in the field of concurrent programming. With the rapid development and promotion of Golang, it seems that coroutine has become one of the necessary features of the best languages in the world.

In recent decades, we have relied on the multithreaded model described above to solve the problems of concurrent programming in Java. To increase the throughput of the system, we have to keep increasing the number of threads, but the threads of the machine are expensive and the number of available threads is limited. Even though we use various thread pools to maximize the cost effectiveness of threads, threads often become bottlenecks in the performance of our applications before CPU, network, or memory resources are exhausted, not unlocking the maximum performance that the hardware should have.

Thread.ofVirtual() and Thread.ofPlatform() are new APIs for creating virtual and platform threads.

Use Thread.startVirtualThread(Runnable) to quickly create a virtual thread and start it.

Determine if a thread is virtual with Thread.isVirtual().

Use Executors.newVirtualThreadPerTaskExecutor() to create an ExecutorService that creates a new virtual thread for each task.

Because virtual threads are a preview feature in Java19, the code that appears in this article needs to be run as follows.

The test is simple: execute 10,000 tasks of one second of sleep in parallel and compare the total execution time and the number of system threads used.

To monitor the number of system threads used for the test, write the following code.

The scheduling thread pool fetches and prints the number of system threads every second, making it easy to observe the number of threads.

The output is as follows (redundant output has been omitted)

Now we use a thread pool with a fixed size of 200 to solve the problem of not being able to request too many system threads.

The output is as follows.

With the fixed size thread pool, there is no problem of creating a large number of system threads causing failure, and the task can be run normally, with a maximum of 207 system threads created, taking a total of 50436ms.

Let’s take a look at the results of using virtual threads.

The only difference between the code that uses virtual threads and the one that uses fixed size is the word Executors.newFixedThreadPool(200) replaced by Executors.newVirtualThreadPerTaskExecutor().

The output is as follows.

As can be seen from the output, the total execution time is 1582 ms and the maximum number of system threads used is 15. The conclusion is clear that using virtual threads is much faster than platform threads and uses less resources from the system threads.

If we replace the task in this test program with one that performs a one-second computation (e.g., sorting a huge array), rather than just sleep for 1 second, there is no significant performance gain even if we increase the number of virtual or platform threads to much larger than the number of processor cores. Because virtual threads are not faster threads, they have no advantage over platform threads in terms of how fast they can run code. Virtual threads exist to provide higher throughput, not speed (lower latency).

The use of virtual threads can significantly increase program throughput if your application meets the following two characteristics.

Def ine a say() method with a method body that loops sleep for 100ms, then outputs index, and executes this method using a goroutine. Go implementation.

You can see that the way coroutines are written in both languages is very similar, in general Java virtual threads are a little more cumbersome to write, Go uses a keyword to easily create a goroutine.

Since there are no slices in Java, arrays and indexes are used instead. there is no channel in Java, so BlockingQueue, which is similar to a pipe, is used instead.

The Go language uses a two-level thread model, where Goroutine is M:N with the system kernel threads, in line with the Java virtual threads. The final goroutine is still handed off to the OS thread for execution, but needs an intermediary to provide context. This is the G-M-P model. 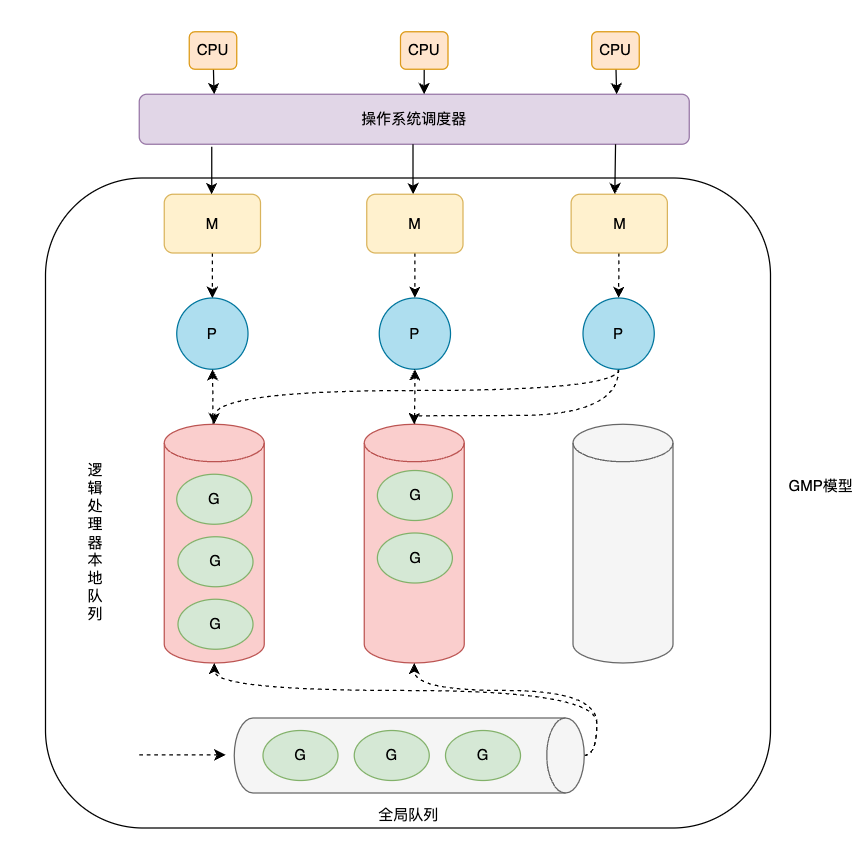 G-M-P In order to maximize the performance of the hardware, the task stealing mechanism is used to execute other waiting G’s when M is free.

The JDK’s virtual thread scheduler is a ForkJoinPool-like thread pool that runs in FIFO mode. The amount of parallelism in the scheduler depends on the number of platform threads in the scheduler’s virtual threads. The default is the number of CPU cores available, but it can be adjusted using the system property jdk.virtualThreadScheduler.parallelism. Note that ForkJoinPool here is different from ForkJoinPool.commonPool(), which is used to implement parallel streams and runs in LIFO mode.

To prevent the thread starvation problem, when there are no more tasks in a thread’s waiting queue, ForkJoinPool also implements another pattern called task stealing, which means that a hungry thread can steal some tasks from another thread’s waiting queue. This is similar to the work stealing mechanism in the Go G-M-P model. 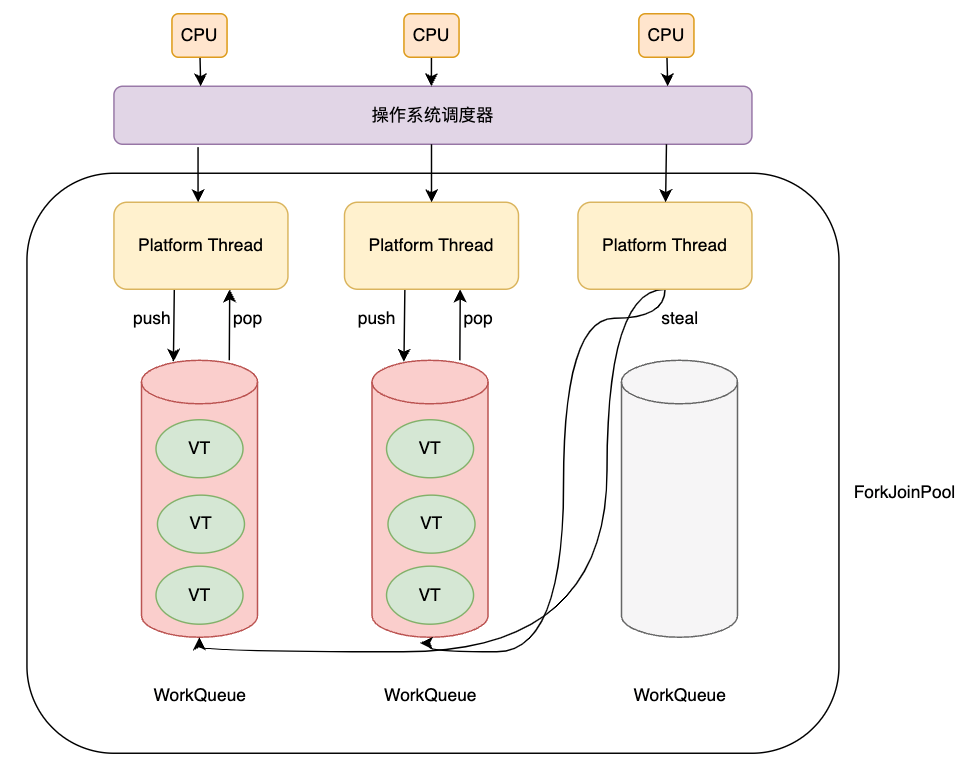 In the following two cases, a virtual thread is fixed to the platform thread running it and cannot be unloaded during blocking operations.

How to uninstall virtual threads

From the console output, we can see that VirtualThread[#21] first runs on thread 1 of the ForkJoinPool, and continues on thread 4 when it returns from sleep.

Why does the virtual thread jump from one platform thread to another after sleep?

Digging deeper into the code, we find that the real method called when the virtual thread sleeps is Continuation.yield.

Reactive programming solves the problem of platform threads needing to block waiting for other system responses. Instead of blocking and waiting for a response, using the asynchronous API notifies you of the result via a callback. When a response arrives, the JVM allocates another thread from the thread pool to process the response. This way, processing a single asynchronous request will involve multiple threads.

In asynchronous programming, we can reduce the response latency of the system, but the number of platform threads is still limited due to hardware limitations, so we still have a bottleneck in system throughput. Another problem is that asynchronous programs are executed in different threads and it is difficult to debug or analyze them.

Virtual threads improve code quality (reducing the difficulty of coding, debugging, and analyzing code) with smaller syntax tweaks, while having the advantage of reactive programming that can dramatically increase system throughput.

This article describes the Java thread model, the use of Java virtual threads, the principle and the applicable scenarios, and also compares it with the popular Goroutine, and also finds similarities between the two implementations, which hopefully will help you understand Java virtual threads. java19 virtual threads is a preview feature, and it is likely to become an official feature in Java21, which is worth waiting for.