FutureTask is a cancelable asynchronous callable API based on the Runnable implementation.

The FutureTask class is an implementation of Future that implements Runnable, and therefore can be executed by an Executor. For example, the above construct with submit can be replaced with : 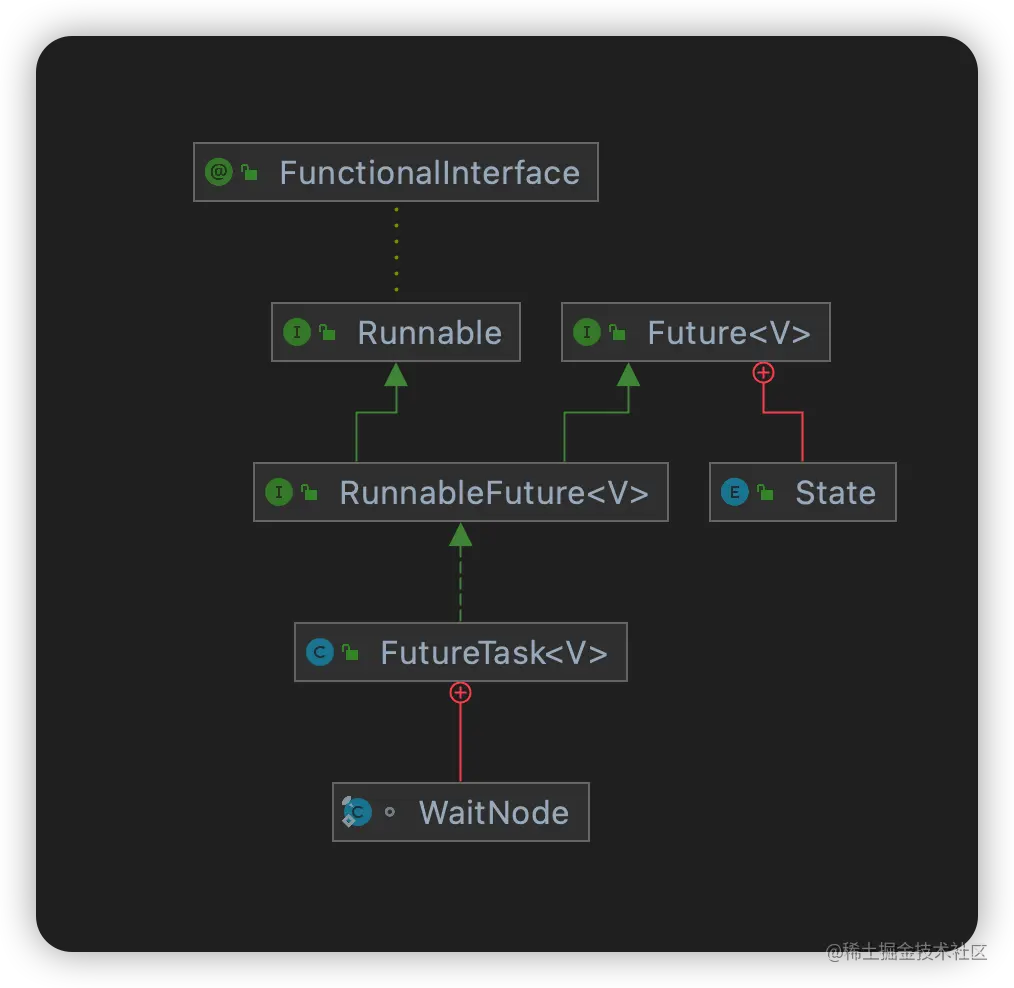 Before describing the capabilities defined in Future, let’s look at its internal class for representing Future state, and the state retrieval method.

The default implementation of Future’s state retrieval is based on isDone(), isCancelled() and constant polling of the get() method for the return value.

When get() returns a normal result, state() returns State.SUCCESS; when an InterruptedException is thrown, the thread will eventually be operated to execute the method that tried to interrupt; when other exceptions are thrown, State.FAILED is returned.

Other methods defined in Future include.

where resultNow() and exceptionNow() come with the default implementation of.

That’s the whole picture of Future.

The Runnable interface is commonly used to implement threaded operations and is very familiar and simple to use.

This interface represents a Future that can be Runnable. The successful execution of the run method means that the execution of the Future is complete and the result of its computation can be obtained.

This interface is only available after JDK 1.6.

FutureTask is a direct implementation of RunnableFuture, which represents a cancelable asynchronous computation task. Based on our analysis of Future and familiarity with Runnable, we can understand its role: a Runnable that can be canceled and can retrieve the running state, and can be used with threads to interrupt thread execution. When the task is not completed, it will cause blocking. And it can also be used with Executor.

The FutureTask has 7 states, initially NEW, and only in the set, setException and cancel methods does the running state change to the final state. During completion, the state may be COMPLETING (when the result is being set) or INTERRUPTING (only if the runner is interrupted to satisfy the transient value of cancel(true)).

The possible state transitions are.

The following analyzes its properties.

Let’s take a look at this WaitNode, which is an internal class of FutureTask.

A linked table structure to sort the waiting threads.

Finally, the methods are analyzed, starting with the constructor method.

Success is to return the given result resFutureTask receives a Callable or a Runnable as an argument, the Runnable will encapsulate it all and save it to the property callable, then update the state of the FutureTask to NEW.

Analyze the methods implemented in the Future interface one by one.

The purpose of finishCompletion() is to wake up all the waiting threads by LockSupport and remove them from the waiting list, then call done() and finally empty the callable. This is equivalent to releasing resources after a successful cancellation.

done() is an empty implementation for subclasses to customize.

There are two methods involved: the awaitDone method and the report method.

Block the current thread and wait for the result of the calculation asynchronously by using CAS and LockSupport’s suspend/wake operations.

There is a removeWaiter method, which internally iterates through waiters and removes timeouts and interrupted waiters.

When the asynchronous logic is finished, the report method is called.

An outcome is used here, which is an Object type, and as a result it can be set by the set method.

Get results or exceptions immediately

Both of these methods return the expected result or exception via the outcome pre-defined return value.

There are two methods involved here, the first is setException(ex) :

The other is the handlePossibleCancellationInterrupt method.

Executes a computation without setting its result, then resets that future to its initial state, or not if the computation encounters an exception or is cancelled. This is designed for tasks that are essentially executed multiple times.

Both run and runAndReset use a RUNNER , which is finally revealed as follows.

MethodHandles.lookup() creates a MethodHandles.Lookup object that can create methods with all access rights, including public, protected, private, default.