Since the Java Memory Model (JMM) states that all variables are stored in main memory, and each thread has its own working memory (cache).

The main memory mentioned here can be simply thought of as heap memory, while the working memory can be thought of as stack memory.

As shown in the figure below. 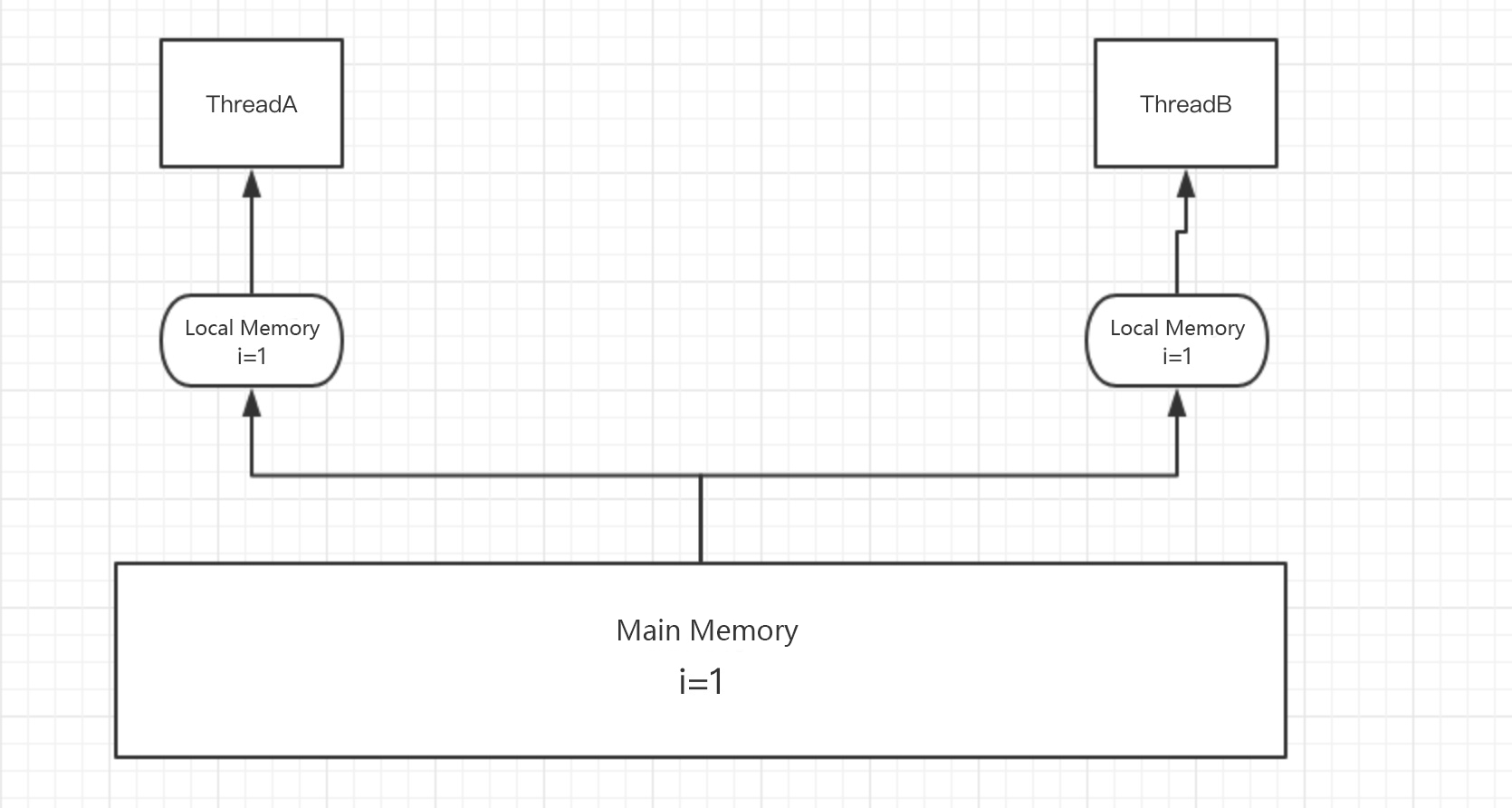 So during concurrent operation it may happen that the data read by thread B is the data before the update by thread A.

Obviously, this is a problem, and volatile can solve the problem.

When a variable is modified with volatile, writes to it by any thread are immediately flushed to main memory and force the thread that cached the variable to clear the data and have to read the latest data from main memory again.

The volatile modification does not allow threads to fetch data directly from main memory; they still need to copy the variable into working memory.

When we need to communicate between two threads based on main memory, the variable to be communicated with must be modified with volatile.

The main thread has modified the flag bit to make thread A stop immediately, which could be delayed if not modified with volatile.

However, there is a misconception here that such use tends to give the impression that Concurrent operations on volatile-modified variables are thread-safe.

When we have three threads (t1,t2,main) accumulating an int at the same time, we find that the final value is less than 30000.

This is because although volatile ensures memory visibility and each thread gets the latest value, the count ++ operation is not atomic, and the operations involved in getting the value, self-incrementing, and assigning the value cannot be done at the same time.

So if you want to achieve thread safety, you can make the three threads execute serially (which is actually single-threaded and does not take advantage of multi-threading).

You can also use synchronize or lock to ensure atomicity.

You can also replace int with AtomicInteger from the Atomic package, which uses the CAS algorithm to guarantee atomicity.

Memory visibility is only one of the semantics of volatile, it also prevents the JVM from performing instruction rearrangement optimizations.

A particularly simple piece of code, which ideally would be executed in the order 1>2>3, may be optimized by the JVM to execute in the order 2>1>3.

You can see that no matter how the JVM is optimized, the premise is to ensure that the final result remains the same in a single thread.

If you can’t see the problem here, look at the next piece of pseudo-code:

The problem is that when the flag is not modified by volatile, the JVM reorders 1 and 2, resulting in the value being used by thread B before it is even initialized.

So adding volatile prevents this kind of reordering optimization and ensures correctness of business.

A classic use case is the double lazy loading singleton pattern:

The volatile keyword here is mainly to prevent instruction reordering.

If you don’t use , singleton = new Singleton();, this code is actually divided into three steps.

Adding volatile is to let the above three steps in order to execute the operation, otherwise it is possible that the second step is executed before the third step, it is possible that a thread gets the singleton object is not yet initialized, so it reports an error.

volatile is used a lot in Java concurrency, such as the value in the Atomic package, and the state in the AbstractQueuedLongSynchronizer are defined as volatile to ensure memory visibility.