According to the foreign media Phoronix presentation: This week’s Linux 5.18 merge window has two driver PRs for the Microsoft exFAT file system, both of which are very important driver patches, albeit small in number.

exFAT on Linux 5.18+ adds an option to allow access to paths with trailing points. Until now, the exFAT driver unconditionally removed trailing dots from path components, while Linux 5.18 introduced the exFAT “keep_last_dots” mount option, which can be used to control whether trailing dots are removed. The motivation for this work was the discovery that the FUSE exFAT driver’s trailing dots worked well, but the Linux kernel driver did not allow it. For more information about this patch can be viewed in the Linux kernel mailing list. 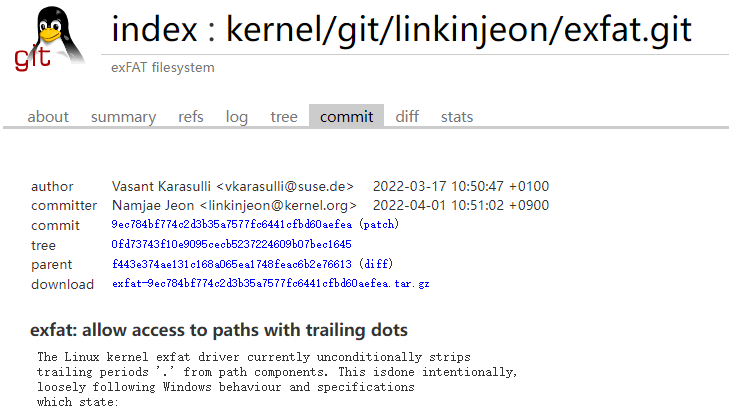 Linux 5.18 another exFAT patch is to: no longer clear VolumeDirty in writebacks and avoid shortening storage device life. Prior to this patch, if ‘dirsync’ or ‘sync’ was not enabled, VolumeDirty was cleared first in the writeback. However, if a sudden power failure occurs after purging VolumeDirty and no other updates are written, the exFAT file system will not detect the power failure on the next mount. And VolumeDirty will be reset when the parent directory is updated, but not cleared. This means that the BootSector must be written to at least once per write back, which shortens the life of the device.