Threads is a frequently used technology in java, this article will explain in detail the life cycle of threads in java, I hope you can give some help.

The state of Thread in java

There are six states of Thread in java, which are.

We can visualize this in a diagram. 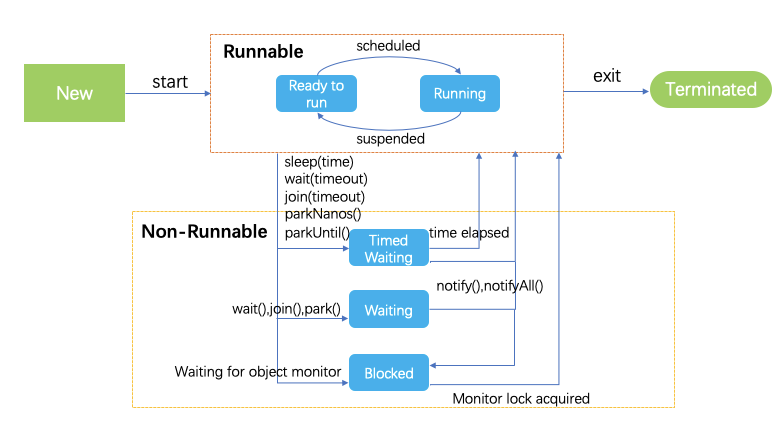 The definition in the JDK code is as follows.

NEW means that the thread is created, but has not yet started execution. Let’s look at an example of NEW.

The above code will output.

Runnable indicates that a thread is in an executable state. This includes both running and ready to run.

Let’s look at an example of Runnable.

The above code will output.

BLOCKED means that the thread is waiting for a resource lock and the resource is currently occupied by another thread.

We will get the following result.

The WAITING state means that a thread is waiting for another thread to perform a specific action. There are three ways to cause a thread to be in the WAITTING state.

Methods 1 and 2 do not require a time parameter to be passed.

Let’s look at the following example of use.

In this example, we are calling t2.join(), which will cause the t1 thread that called it to be in the WAITTING state.

Let’s look at the output.

The TIMED_WAITING state means waiting for a limited time for other threads to perform certain operations.

There are 5 ways to achieve this state in java.

In the above example we have called Thread.sleep(5000) to keep the thread in TIMED_WAITING state.

Look at the following output.

So the question arises, what is the difference between TIMED_WAITING and WAITTING?

TIMED_WAITING will be woken up if it doesn’t wait for a specific operation by another thread within a given time, thus entering the queue of contention for resource locks, and will become Runnable if it can get a lock, or BLOCKED if it can’t.

TERMINATED means that the thread has finished executing. Let’s look at the following example.