Shared lock as the name implies is that multiple threads can share a lock, use acquireShared in the synchronizer to get the shared lock (synchronous state), the source code of the method is as follows.

First try to get the shared lock by tryAcquireShared, the method is a template method in the synchronizer just throw an unsupported operation exception, need developers to implement their own, while the return value of the method has three different types respectively represent three different states, the meaning of the following.

method first calls the addWaiter method to encapsulate the current thread and the node whose wait status is shared module and add it to the wait synchronization queue, you can find that the nextWaiter property of the node in shared mode is a fixed value Node.SHARED. If the return value is greater than or equal to 0, then the setHeadAndPropagate method is called to update the head node and propagate backward to wake up the successor node if there are available resources. If the interrupt has occurred, the current thread is interrupted and the method returns at the end. If the return value is less than 0, it means that the lock acquisition failed and the current thread needs to be hung to block or continue to spin to acquire the shared lock. Here is the implementation of the setHeadAndPropagate method.

First set the node that currently gets the lock as the head node, then the method parameter propagate > 0 means that the return value of the previous tryAcquireShared method is greater than 0, which means that there is still a remaining shared lock to get, then get the successor node of the current node and wake up the node when the successor node is a shared node to try to get the lock, doReleaseShared method is the main logic for synchronizer shared lock release.

The synchronizer provides the releaseShared method for releasing a shared lock, the source code of which is shown below.

As you can see, unlike exclusive lock release, in shared mode, state synchronization and release can be performed simultaneously, with atomicity guaranteed by CAS, and the loop will continue if the head node changes. Every time a shared node wakes up in shared mode, the head node points to it, so that all subsequent nodes that have access to the shared lock are guaranteed to wake up.

How to customize synchronization components

Let’s start a test with 20 threads to see if the custom synchronization tool class TripletsLock meets our expectations. The test code is as follows.

The test results are as follows. 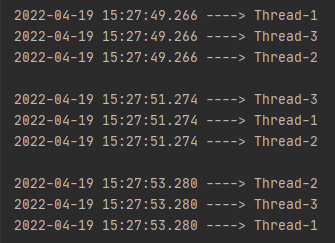 From the above test results, we can find that only three threads can get the lock at the same moment, as expected, and it should be clear here that this lock acquisition process is non-fair.

This article analyzes the basic data structures in the synchronizer, the process of obtaining and releasing exclusive and shared synchronization state. AbstractQueuedSynchronizer is the basic framework for implementing multi-threaded concurrency tools, and being familiar with it will help us to better use its features and related tools.