AbstractQueuedSynchronizer is the basic framework for implementing concurrency tools in the JDK, and a deeper understanding of it will help us to better use its features and related tools. We hope you will read this article carefully and gain something from it.

In Java, access to shared resources by multiple threads is controlled by lock. We know that the lock function can be implemented by the synchronized keyword, which can implicitly acquire locks, that is, we do not need to care about the process of acquiring and releasing locks by using this keyword, but while it provides convenience, it also means that its flexibility is reduced. For example, there is a scenario where lock A is acquired first, then lock B is acquired, when lock B is acquired, lock A is released and lock C is acquired, when lock C is acquired, then lock B is released and lock D is acquired, and so on. After Java SE 5, a new Lock interface and a series of implementation classes were added to provide the same functionality as the synchronized keyword, which requires us to display the lock acquisition and release, in addition to providing synchronization features such as interruptible lock acquisition operations and timeout lock acquisition. Most of the Lock interface implementation classes provided in the JDK aggregate a subclass of the synchronizer AQS to achieve multi-threaded access control, so let’s take a look at the basic framework for building locks and other synchronization components - AQS ( AbstractQueuedSynchronizer)

The synchronous queue uses the static internal class Node in the synchronizer to hold references to threads that get synchronized state, the wait state of the thread, the predecessor node and the successor node. 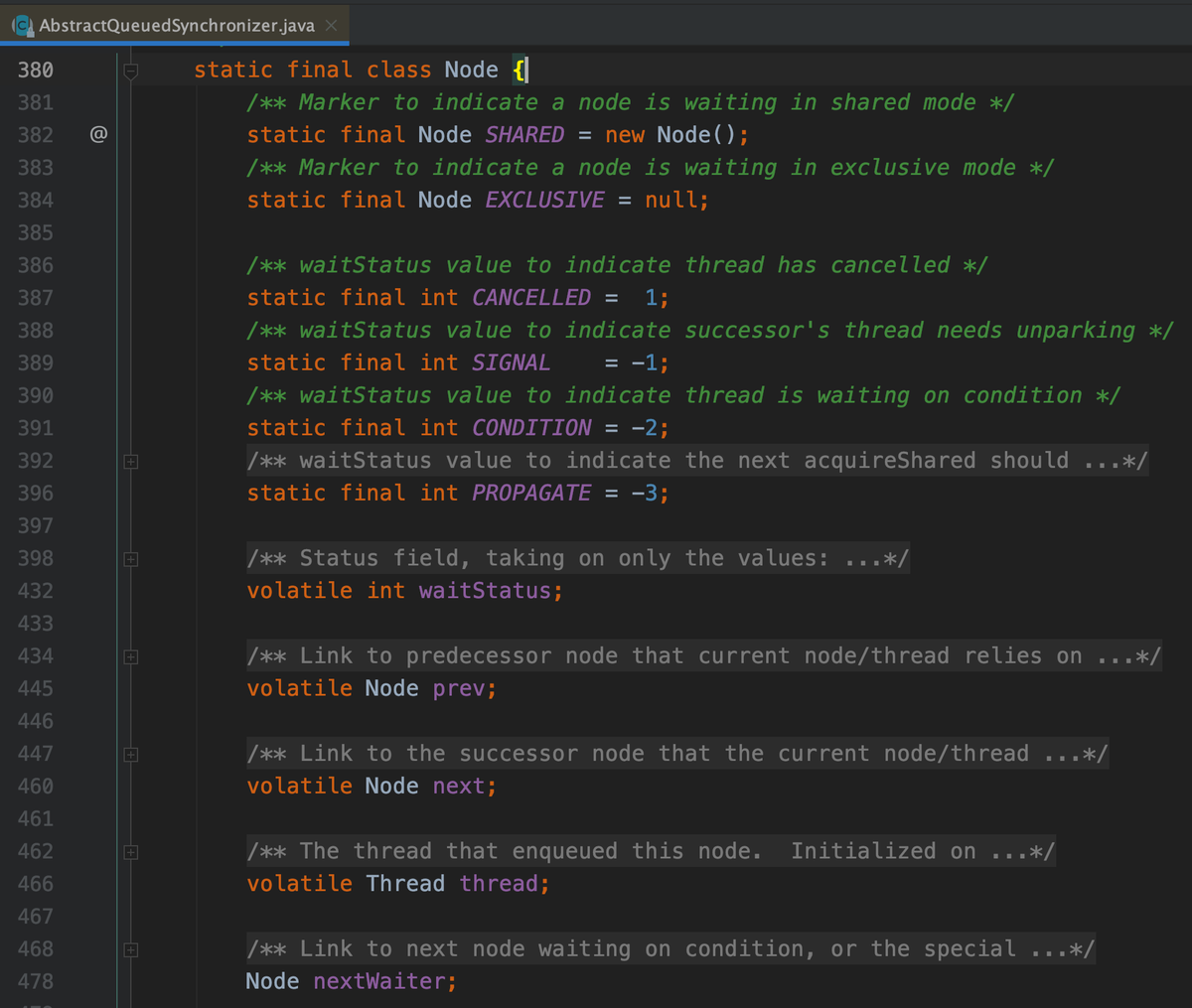 The names and specific meanings of the attributes of the Node nodes in the synchronous queue are shown in the following table.

The synchronizer provides the acquire(int arg) method to acquire the exclusive synchronous state, which is the same as acquiring the lock.

Construct a Node node with the lock mode (shared or exclusive) specified by the method parameters and the current thread. If the synchronous queue has been initialized, an attempt to join the queue from the tail will be made first, using the compareAndSetTail method to ensure atomicity. The source code of this method is based on the Unsafe class provided in the sun.misc package. If the first attempt to join the synchronous queue fails, the enq method will be called again to perform the queue entry operation, and the source code of the enq method will be followed up as follows.

The source code is similar to the first attempt to join the queue, except that the method adds a synchronous queue initialization judgment, uses the compareAndSetHead method to ensure the atomicity of setting the head node, and is also based on the Unsafe class, and then has an outer for (;;) dead loop, and the only exit condition is from the The only exit condition is a successful queue entry from the end of the queue, that is, if the method returns successfully, it means that the queue has been successfully entered, so that the execution of addWaiter is completed and the current Node node is returned. The node is then used as an input to the acquireQueued method to continue with the other steps, which is shown below.

Thread blocking is implemented through the LockSupport tool class, and a deep dive into its source code reveals that it is also based on the Unsafe class. If both methods return true, the break flag is updated. Another question here is when will a node’s wait status waitStatus be changed to CANCELLED to cancel the request of the node thread to obtain a lock? Careful friends may have noticed that the finally block in the source code of the acquireQueued method posted above will decide whether to call the cancelAcquire method based on the failed flag, which is used to modify the node status to CANCELLED, leaving the specific implementation of the method to everyone to The specific implementation of the method is left for you to explore. This completes the process of AQS exclusive synchronous state acquisition lock. 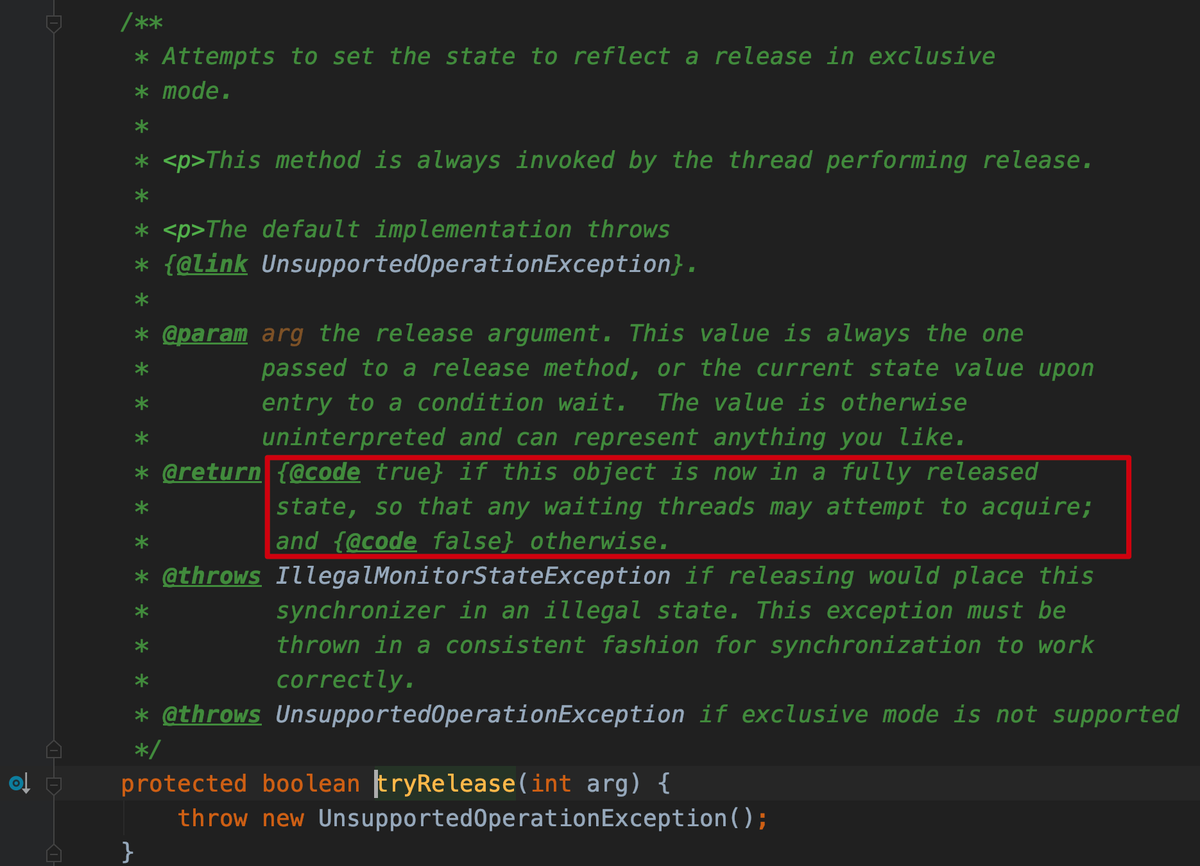 As you can see from its JavaDoc, if it returns false, it means that the lock release failed and the method is finished. If the method returns true, then the current thread has released the lock successfully and needs to notify the threads in the queue waiting to get the lock to do so. If the current head node is not null and its waiting state is not the initial state (0), the thread is released from the blocking state and the method unparkSuccessor is used to achieve the following source code.

Suppose a thread has reached ① in the above diagram and ② has not yet been executed, and another thread happens to execute the unparkSuccessor method, then it is not possible to find the node from front to back, because the node’s successor pointer next has not been assigned yet, so it is necessary to find it from back to front. At this point, the exclusive lock release operation is over.

The synchronizer provides the acquireInterruptibly method to perform interruptible interrupt-acquiring lock operations, and the source code for the method implementation is as follows.

A closer look reveals that the source code of this method is basically similar to the implementation of the acquireQueued method above, except that the queueing operation addWaiter has been placed inside the method, and there is also a difference that when the interrupt is judged to be needed inside the loop, an exception is thrown directly in response to the interrupt.

Synchronizer provides tryAcquireNanos method to obtain synchronized state (i.e. lock) on a timeout, this method provides the timeout feature which was not supported by the synchronized keyword before. otherwise, false is returned. The source code of the method is as follows.

The tryAcquire method will be called first to try to acquire a lock, and return immediately if the acquisition is successful, otherwise the doAcquireNanos method will be called to enter the timeout to acquire a lock. As you can see above, the acquireInterruptibly method of the synchronizer throws an interrupted exception InterruptedException and returns immediately if the current thread is interrupted while waiting for the synchronized state to be acquired. The timeout acquisition process actually adds the timeout acquisition feature to the response to interrupts. The source code of the doAcquireNanos method is as follows.

From the source code of the above method, we can see that the main idea of timeout acquisition here is: first use the current time plus the timeout interval deadline passed in as a parameter to calculate the timeout point, then use the timeout point deadline minus the current time to get the remaining time nanosTimeout each time the loop is performed, if the If the remaining time is less than 0, then the method will end and return false, and if the remaining time is greater than 0. You can see that the execution of the spin inside and the above exclusive synchronous acquisition of lock status acquireQueued method there is the same routine, that is, when the current node’s predecessor is the head node call tryAcquire to try to acquire a lock, if the acquisition is successful then return. 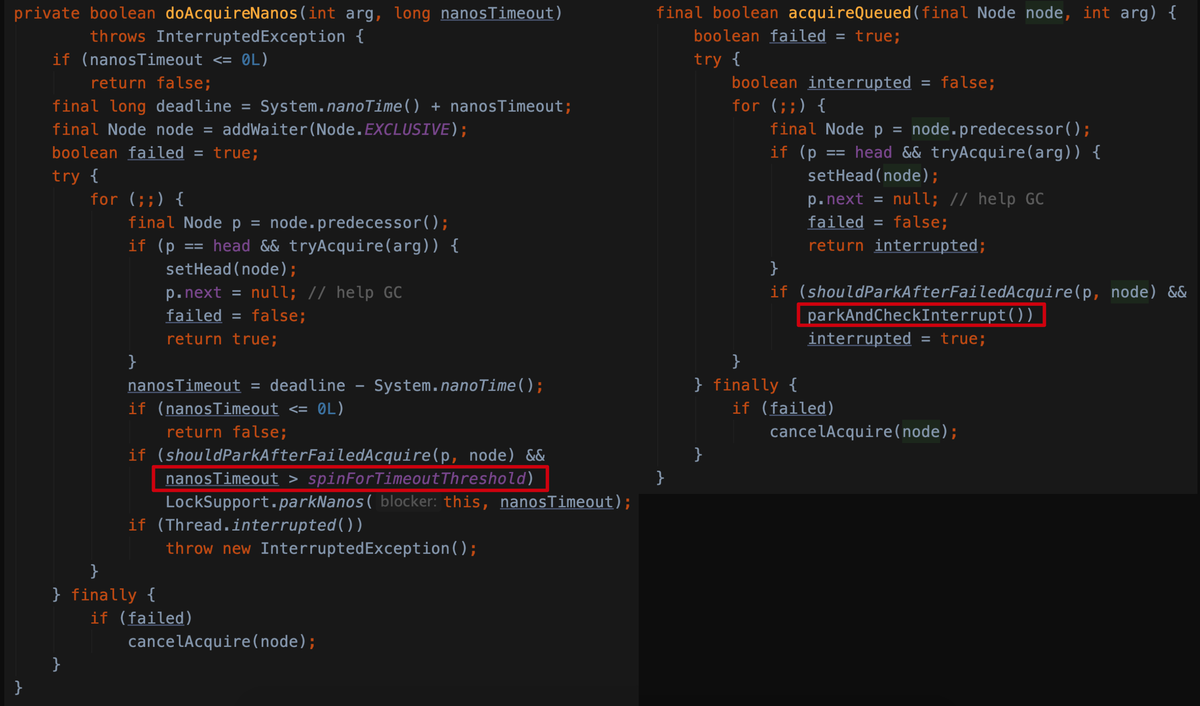 If the current thread fails to acquire a lock, it will determine whether the remaining timeout nanosTimeout is less than 0. If it is less than 0, the method will return immediately. shouldParkAfterFailedAcquire method, it will further compare the size of the remaining timeout nanosTimeout and spinForTimeoutThreshold, and if it is less than or equal tospinForTimeoutThreshold value (1000 nanoseconds), the current thread will not wait for the timeout, but will go through the spin process again. The main reason for adding this latter judgment is that waiting in a very short time (less than 1000 nanoseconds) cannot be done very precisely, and if we wait for a timeout at this point, it will make the timeout we specify for nanosTimeout feel less precise in general. The process of acquiring a lock.