DoS is short for Denial of Service, which means denial of service. The attack that causes DoS is called a DoS attack, and its purpose is to make the computer or network unable to provide normal services. Denial of Service exists on various web services, this web service can be implemented in c, c++, or go, java, php, python, and other languages.

When I was digging into the XStream deserialization exploit chain, I also found an exploit chain that could launch a “regular backtracking CPU exhaustion, dead loop CPU exhaustion” type DoS attack, and ended up with multiple CVE number tags and signatures for XStream.

Is it possible that these are the only types of DoS that exist in the Java system? I don’t think so. I think there are bound to be a lot of other types of DoS flaws in Java systems that we just haven’t discovered yet. When I was auditing a Java system one day, I suddenly found a defect that was different from these DoS types, and when I audited a large number of other Java systems, it existed universally, and I knew it was a universal defect - Memory DoS.

In web services implemented in c, c++ and other languages, there may be various types of DoS such as null pointer DoS, CPU exhaustion DoS, etc. Why are there so few types of DoS in Java? This brings us to the exception mechanism in Java.

Exceptions are some errors in a program, but not all errors are exceptions, and errors can sometimes be avoided.

For example, if your code is missing a semicolon, then running out the result is prompted by the error java.lang.Error; if you use System.out.println(11/0), then you are because you used 0 as a divisor and will throw the exception java.lang.ArithmeticException.

Exceptions can occur for a number of reasons, and usually contain the following major categories.

To understand how Java exception handling works, you need to master the following three types of exceptions.

The description of the Java exception mechanism, described above, makes it clear that when an exception occurs, it can often be mostly caught and handled, but when an error occurs, it means that the program is no longer running properly. That is to say, most of the exceptions we generate in the Java system, there is no way to cause a DoS, only to cause an error that will prevent the program from running properly and lead to a DoS, which is why in Java, the type of DoS is relatively small.

As mentioned in the previous section, we can implement DoS if we can make the program generate java.lang.OutOfMemoryError error, which is called Memory DoS, a DoS attack that runs out of memory and causes the program to throw an error.

So, how do you get a Java system to generate a java.lang. The answer must be “run out of memory”!

I have scanned several java systems, components through a simple code scanning tool, which found a large number of exploitable Memory DoS flaws, yes, this means that I can make these systems generate java.lang. And these systems and components include the more famous ones like Java SE, WebLogic, Spring, Sentinel, Jackson, xstream, etc.

In my scan of Java SE, I found three classes that can cause the system to generate java.lang.OutOfMemoryError errors when deserializing, and perform Memory DoS attacks on the system. I immediately reported it to Oracle, and it was eventually fixed in Java SE 8u301

Let’s take a look at the Java SE 8u301 fix and before the fix, the difference between them compared.

With these three examples, do you see anything?

Yes, this is a kind of Memory DoS defect that exists by taking advantage of the fact that the capacity parameter is controllable when the array is initialized. When a malicious user controls the capacity parameter and sets the parameter value size to the int maximum value of 2147483647-2 (2147483645 is the maximum limit for array initialization), then, when the array is initialized, the JVM will run out of memory, thus causing the system to generate a java.lang.OutOfMemoryError error and realize Memory DoS.

In my scan of Weblogic, I found dozens of classes that can cause the system to generate java.lang.OutOfMemoryError errors during deserialization, enabling Memory DoS attacks on the system. The scan took a few minutes, but I spent a lot of time writing the report.

With these three examples, do you see anything? 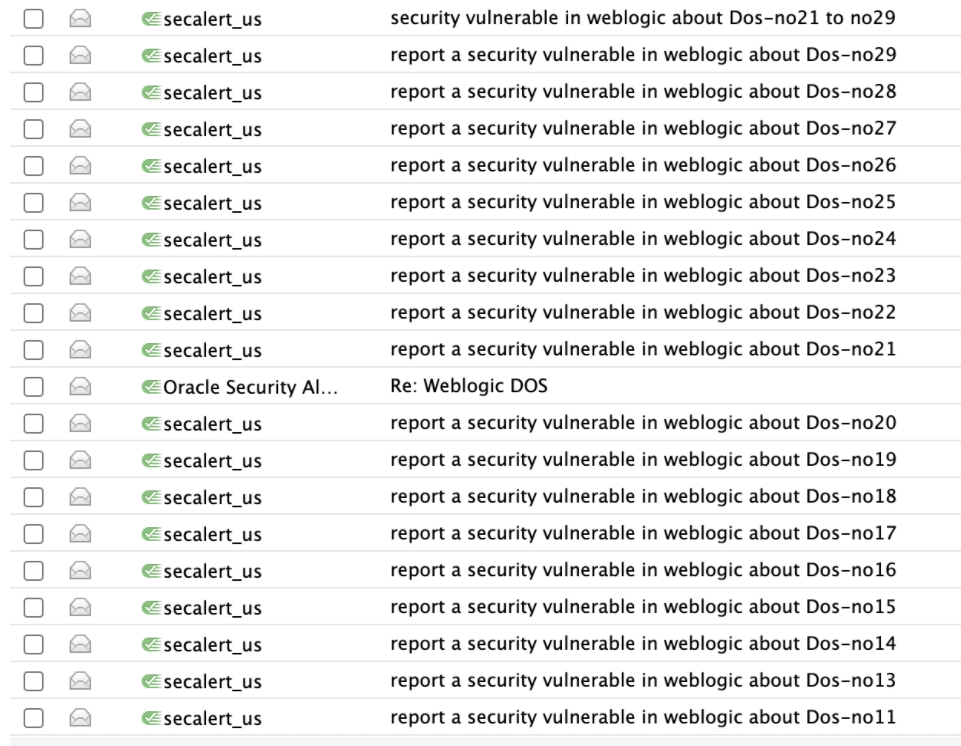 Yes, this is a kind of Memory DoS defect that exists by taking advantage of the fact that the capacity parameter is controllable when the array is initialized. When a malicious user controls the capacity parameter and sets the parameter value size to the int maximum value of 2147483647-2 (2147483645 is the maximum limit for array initialization), then, when the array is initialized, the JVM will run out of memory, thus causing the system to generate a java.lang.OutOfMemoryError error and realize Memory DoS.

After reporting it to Oracle, I learned that it was fixed in the 2021.07 security notification at https://www.oracle.com/security-alerts/cpujul2021.html.

The Memory DoS in WebLogic is not very different from the Java SE one, so I won’t list them one by one.

However, the preceding examples in WebLogic as well as Java SE, are sinks that attack at the time of array initialization. in fact, there is another, it is the java collection Collection, when a Collection is initialized, often in its internal implementation, will initialize one or more arrays to store data. Then, if at the time of Collection initialization, we can control its capacity parameter, it can make the JVM memory is insufficient, thus causing the system to generate java.lang.OutOfMemoryError error, resulting in Memory DoS.

As you can see, this line of code initializes the HashMap, and we are able to control the size of its construction parameter values.

Now the HashMap construction parameters we can control, meaning that we can freely specify the size of its initialization capacity, if its size exceeds the memory available to the JVM, it will cause the system to generate java.lang.OutOfMemoryError error and achieve Memory DoS.

In Spring, I did a simple audit of the source code of its mvc framework and found that in an HttpMessageConverter, there is an array initialization capacity parameter controllable, which will be able to cause the system to generate a java.lang.OutOfMemoryError error when a simple construction is performed on http to achieve Memory DoS.

After I reported this to Spring officials, they decided that it was a security issue, but that it was up to other systems to limit it, so it was not fixed.

I also offered a fix to the Spring developers, but they didn’t end up adopting it, so the security issue still exists, but fortunately, you don’t need to worry about it, because this vulnerability requires certain prerequisites to exploit.

As you can see, when we initiate the http request, we are able to use Content-Length this http header to control the initialization capacity of the byte array, if we pass in the size of the Content-Length is the maximum of the Long type, it will cause the system to generate java.lang. OutOfMemoryError error, to achieve Memory DoS attack.

However, to exploit this vulnerability, the prerequisite is that the developer needs to write some implementation of Controller, which requires Controller to receive a parameter of type byte[], because only then Spring is using org.springframework.http. converter.ByteArrayHttpMessageConverter to handle it.

Java SE, WebLogic, Spring, but all are nothing more than attacks on array initialization parameters, so are there any other Memory DoS that can cause the system to generate java.lang.OutOfMemoryError errors?

The answer is “yes”. When I audited Alibaba Sentinel, I found that its control platform, which can also be called a registry (sentinel-dashboard), has an http endpoint that can be accessed without authentication, and with a little use, it can cause the system to generate java. OutOfMemoryError error can be caused by the system. If you are familiar with Sentinel, you know that it is an open source flow-limiting fusion component. In the official implementation, clients that access Sentinel will register their services with the registry, probably to reduce the difficulty of using and accessing Sentinel.

This http endpoint is /registry/machine

By tracing the above code, we can see that the data submitted by the user has to be stored straight to the memory. Because this http endpoint supports GET, POST requests, so when we use POST method in sending http requests and add very large data in the body, such as app parameters, put a 1MBytes or 10MBytes, or even larger data, then it will cause the server to run out of memory and generate java .lang.OutOfMemoryError error, and implement Memory DoS.

Some readers in the test array initialization Memory DoS, found that although it can make the system to generate java.lang.OutOfMemoryError error, but the system does not crash as a result, to achieve the full Memory DoS, what is the reason?

And look at the following three examples.

Because the JVM gc mechanism is based on object references to determine whether the object memory needs to be reclaimed, and here, if we initialize an array object that is a local variable reference and only has a local variable reference, then this means that when the execution of this thread stack is complete, if the reference no longer exists, then the JVM will reclaim this piece of memory when it executes gc, so that alone This way we can only get a short period of time Memory DoS, may be 5 seconds (already relatively high quality), or only 0.1 seconds, there is no way to fully realize Memory DoS, and only let this object life cycle long enough, or reference has always existed, then, in its life cycle, we can occupy a long time JVM heap enough memory, so that the JVM can not recycle This part of the memory, so as to achieve Memory DoS.

Since this article is actually nothing hardcore, so, not to write too many examples, so as not to stink and long.

VI. Some CVEs about Memory DoS